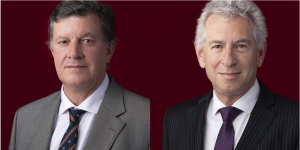 Valadas Coriel & Associados (“VCA”) has just announced the reinforcement of its Department of Real Estate, Construction and Engineering Law, with the integration of Miguel Tönnies and Miguel Cavazzini. Lawyers join the Firm as Of Counsels.

With more than 30 years of experience, Miguel Tönnies and Miguel Cavazzini have developed a large part of their professional career in the Engineering and Construction sector, as in-house lawyers for reputable companies, among which Technical Constructions, Opca, Somague and Sacyr.

Miguel Tönnies has extensive international experience, having, along with other duties, managed Sacyr’s legal teams in the negotiation of various concessions in the United States of America. Being Portuguese and German his native languages, he will, at the same time, assume the management of VCA’s German Desk.

From Miguel Cavazzini’s professional career, emphasis shall be given to the management of legal support provided to the international area of ​​Sacyr Construccion and his contribution in the legal team that assisted in the construction of the expansion of the Panama Canal, at the time the largest public works contract in the world.

This site uses cookies to enable a better user experience. By browsing the site you will consent to its use.OkRead more